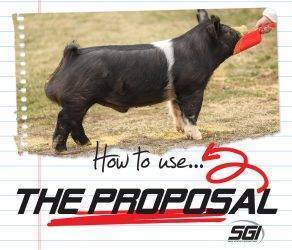 THE PROPOSAL is an exciting, new addition from Git-R-Done Showpigs in Yuma, AZ. For those that don’t believe that there could be elite showpigs generated in that part of the world, we say, go see for yourself. THE PROPOSAL is the culmination of elite build, presence, stoutness and proven pedigree. His littermates were multiple-time champions in Arizona and California during the start of 2020. We saw some of these pigs in-person during our visit and they would’ve been standouts in the showring in any geography. THE PROPOSAL’s mother generated the popular Reserve Grand Gilt at the Georgia National in the Fall ’19 when mated to UNLOCKED. His grandmother, “Daisy”, is infamous for generating multiple herd boars and champions, and has been a can’t-miss kind of sow at Git-R-Done. The blend of KING OF THE HILL’s power and density with the elegant build and timeless design of the females backing THE PROPOSAL make him a truly special breeding hog.

The playbook: When we first saw THE PROPOSAL get out and drive, his rear-view ability to plant, dig and go with the kind of drive and athleticism required to win at the highest of levels immediately excited us. THE PROPOSAL has a dense skull and big-boy shape and spread up high. We believe he will be a versatile crossbred breeding boar option and think that his very best fit may be on bulky sows due to his incredible comfort level and range of motion. This guy possesses show barrow generating attributes that are hard to find, and has the genetic potential to bring consistency to the table that few crossbreds can offer.